Should You Reapply Old Thermal Paste? [With Data]

One of the hardest and most contentious steps of building a computer is applying thermal paste. While most everything else is as simple as snapping connectors together, putting in screws, and hoping that your graphics card isn’t too big for your case, it’s hard to be sure that the cooling system of your PC is operating at maximum efficiency. Installation notwithstanding, I’ve always wondered two things about thermal paste:

With an old desktop sitting around my house and a few spare hours, I decided to answer both questions by setting up some tests and replacing the stock thermal paste.

Setting Up the Test

I tried to make the test as scientific as possible with the hope of getting a clear answer. The PC in question was purchased in 2012, so it’s a good example of an older machine that’s seen regular home use over the course of its life. Before starting the test, I had to clean out a vast amount of dust that had accumulated inside it over the years.

Speccy is certainly not the only piece of software that can be used to record CPU temperatures, but I’ve found it to be reasonably accurate in the past. Besides, the temperatures by themselves are not that important — I’m mainly interested in the difference in temperatures before and after replacing the thermal paste.

To establish a baseline, I tested the PC at a warm idle and then under load. To make sure the computer was sufficiently warm, I ran a few passes with MemTest86+. Memtest86+ doesn’t put much load on the CPU, but I just wanted to get the computer doing something so it didn’t have the unfair advantage of a cold start. After letting it run for a few hours, I rebooted directly into Windows and waited until the CPU was almost completely idle before recording the temperatures.

When comparing idle versus load temperatures, it’s important to keep in mind that the i5-2320 downclocks and undervolts itself when idle to save power. At idle, downclocked to 1.6 GHz on all four cores, I measured the average CPU temp as well as the general spread of temperatures per core.

To establish a baseline at load, I ran IntelBurnTest on “high” (2048 MB of RAM) for 5 passes and recorded the maximum temperature from the final pass.

It’s worth noting that this particular motherboard seems to only increase the CPU fan speed once the CPU reaches 70° C. I was surprised at how warm the chip had to get before the fan speed increased, but once it reached 70 degrees the temperatures seemed to stabilize.

There’s a number of different techniques that can be used to apply thermal paste. Some people suggest drawing a line across the CPU, while others suggest spreading the thermal paste out before installing the heatsink. I’m not a fan of either of those approaches, since the line can easily be squeezed over the edge of the CPU and air bubbles can be introduced into the paste by spreading it. Instead, I opted to use the tried-and-true “single dot in the center of the CPU” method.

First, however, I wanted to see what the original thermal paste looked like. Here’s what I saw when I detached the stock heatsink: 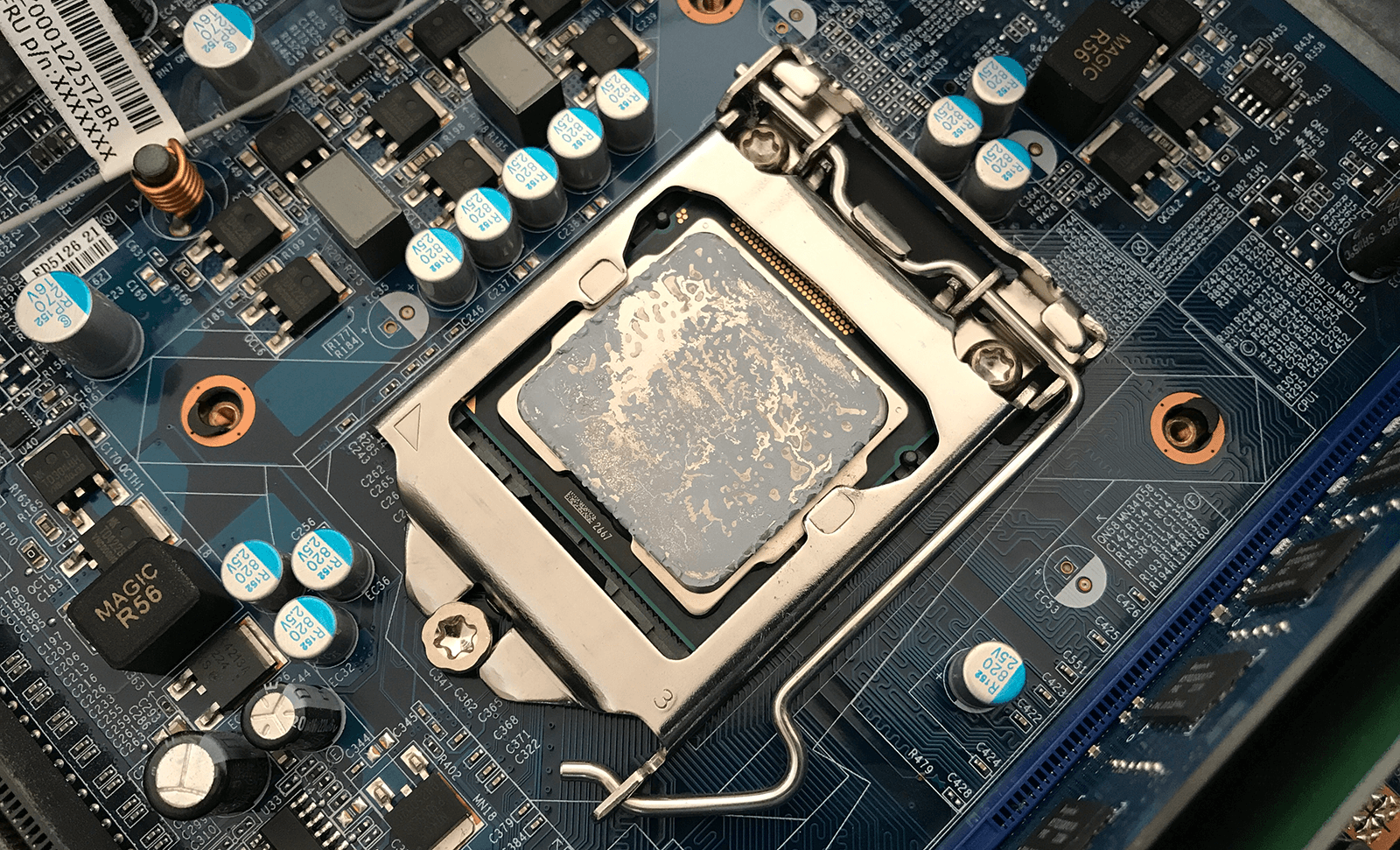 It’s not bad. The paste is spread out evenly and isn’t too thick. It also wasn’t dry in the slightest, even though some Internet forums claim that old paste dries up over time.

The paste was also spread evenly on the stock aluminum heatsink, as I expected: 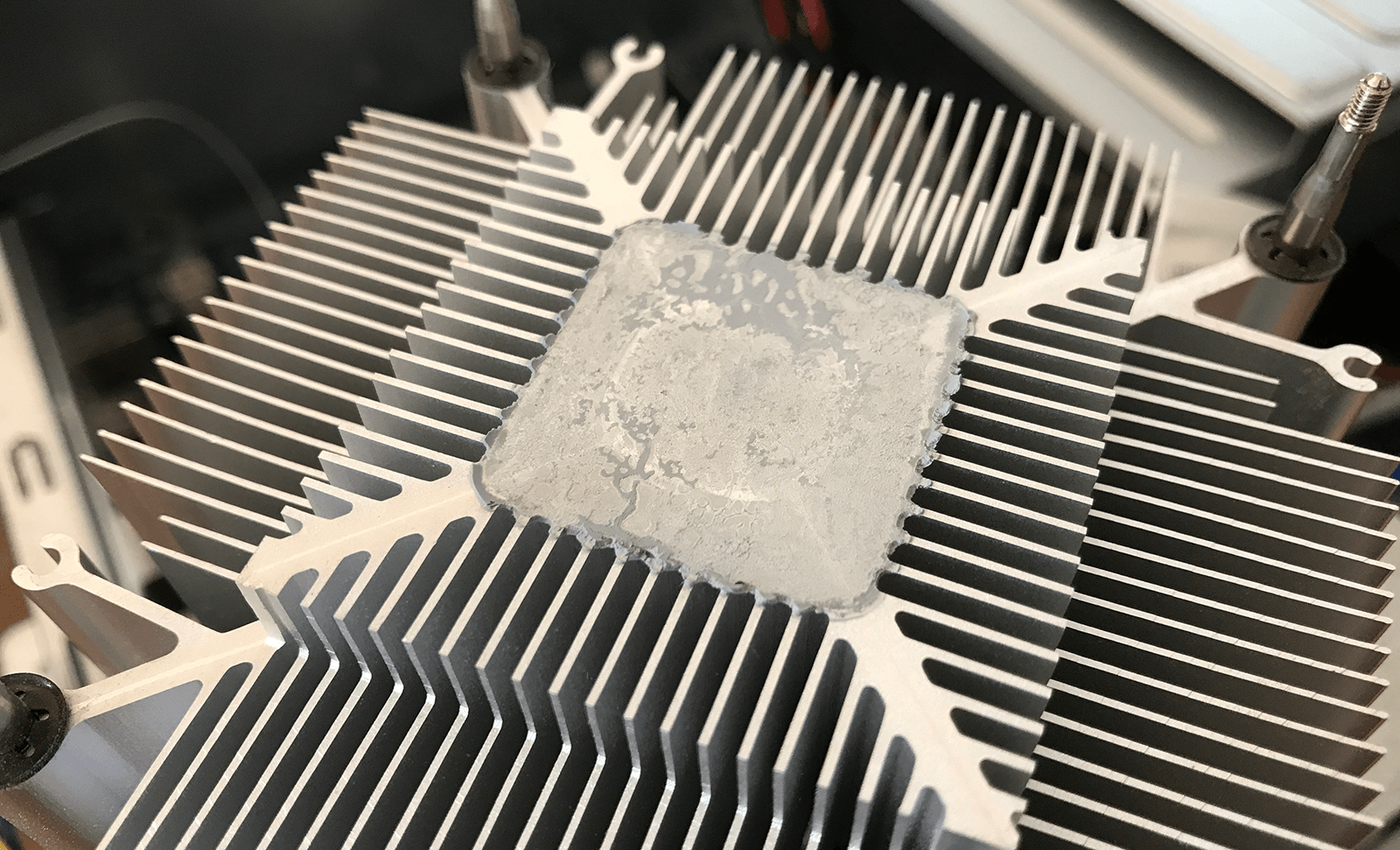 With my curiosity satisfied, I cleaned the CPU and heatsink with isopropyl alcohol (92% concentration, the highest I can usually find in stores). I put on slightly more thermal paste than I generally do, but Arctic Silver Céramique 2 is advertised as non-conductive in the off chance that it does get somewhere it shouldn’t. 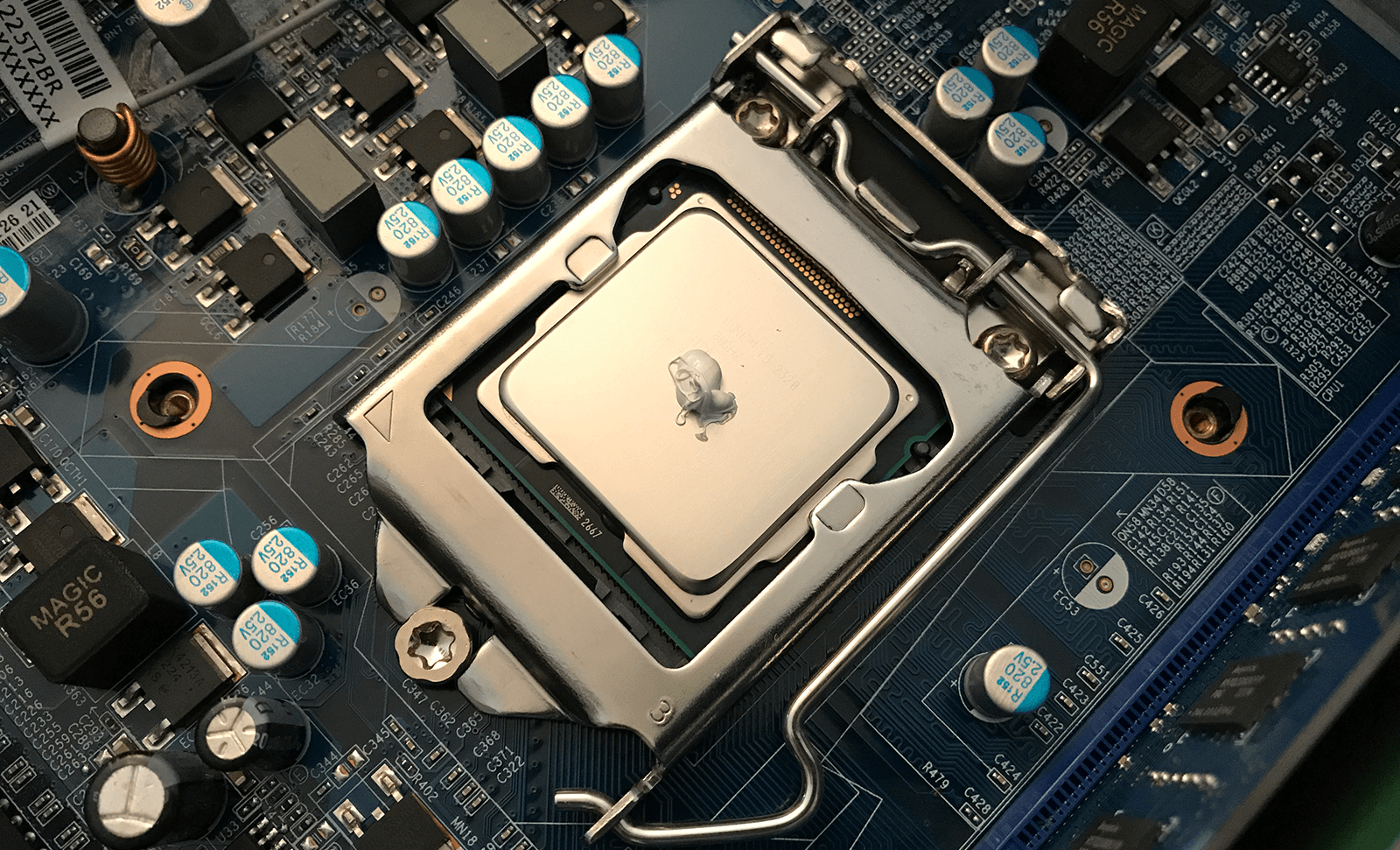 With the new thermal paste on, I re-installed the stock heatsink and pieced the computer back together. Careful inspection down the side of the heatsink revealed that the replacement paste had just barely reached the edge of the CPU, indicating that it had fully covered the CPU lid as intended.

Arctic Silver’s site claims that Céramique 2 is capable of dropping CPU temperatures by “2 to 10 degrees centigrade”. They also claim that due to the nature of the paste it takes “a minimum of 25 hours and several thermal cycles” for it to reach maximum cooling efficiency. Unfortunately, I didn’t have 25 hours to wait for the paste to fully cure, so I ran the CPU through a couple thermal cycles and called it good. Feel free to discount my results because of this, but keep in mind I have tested the break-in period before and I don’t think it makes much of a difference.

I performed the same tests as with the stock paste, so see the “Baseline” section for the methods I used. Without further ado, here’s the results I measured at idle after replacing the stock thermal paste:

And the results at load:

To my surprise, the idle temperature dropped by fully 5° C, at least according to my measurements. However, the load temperature didn’t change at all.

Five degrees at idle could be chalked up to measurement error, but I’d like to think that replacing the paste had some effect. On the other hand, I have a plausible but disappointing explanation for why the load temperatures didn’t change: the fan speed on this particular desktop is dynamic and seems to only increase when the CPU hits 70° C. Without a way to constrain the fan to a certain speed, it did its job and kept the CPU from going too far over 70° C. For what it’s worth, the points at which the fan speed increased seemed identical before and after replacing the thermal paste, indicating that the CPU wasn’t heating up much faster either way.

In short: was it worth it? Not to me, as it took several hours and a lot of effort and resources for minimal gain. It seems like, at least on this particular computer, there’s little improvement to be gained by replacing the stock thermal paste.